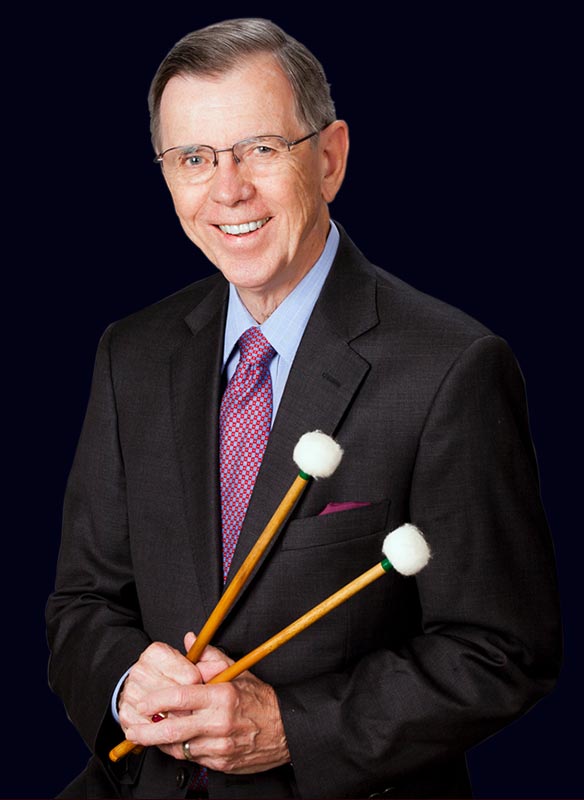 Stanley Leonard has been an active participant in the world of percussion for over seventy years. He performed as percussionist with the Kansas City Philharmonic, the Rochester Philharmonic, the Nineteenth Army Band, and had a distinguished thirty-eight year career as Principal Timpanist of the Pittsburgh Symphony Orchestra. This career includes nationwide and international concert performances, television series, solo appearances with the Symphony, two world premier performances of commissioned works and two American premieres. He performed with the PSO on more than fifty recordings for Capitol, Angel, Phillips, Columbia, Command, Everest and Sony. Pittsburgh Symphony Music Directors were consistent in their appreciation of Stanley's artistry. William Steinberg stated, "....He is the number one man in the orchestra....the embodiment of tympanum playing." Andre Previn said, "..an orchestra is very rarely graced by a virtuoso (timpanist) who is also  a consummate musician." When Leonard retired Lorin Maazel commented, "He is a hard man to replace."

During the Pittsburgh years Stanley taught percussion, timpani and percussion ensemble at Carnegie Mellon University. He held this position for twenty years, later assuming a decade of responsibilities at Duquesne University as Adjunct Professor of Percussion, teaching timpani and conducting the percussion ensemble. His students have found places in the performing world, education, and the music industry. Starting his university teaching career in 1958, Stanley discovered a shortage of music for students to use for technical study and to perform in ensemble. He began writing technical studies, etudes, solos for snare drum, timpani and percussion ensemble music.

Established publishers in the United States and Europe became interested in his music and there are now over sixty of his works for percussion, timpani, timpani and organ/trumpet, percussion ensemble and handbells published by Alfred Music, Ludwig Masters Publications, C. Alan Publications, Drop 6 Media, Boosey and Hawkes, PerMus Publications, Marimba Productions, Bachovich Music and Rowloff. Forty-seven more pieces are listed in the Stanley Leonard Percussion Music catalog. The music is performed worldwide. He is the author of the well known method Pedal Technique for the Timpani. Stanley is a member of the American Society of Composers, Authors, and Publishers. He performs and conducts his percussion compositions on four CDs, Canticle, Collage, Reunion. Retrospections presents some of his early and latest compositions. The CD Acclamation highlights his performance and music for organ, timpani and trumpet. The Jubilate CD features his music for handbells.

Stanley attended the Eastman School of Music and studied with William Street, graduating in 1954 with a Bachelor of Music degree and Performers Certificate in Percussion. He was a charter member of the first Eastman Wind Ensemble, founded in 1952 by Frederick Fennell. See his Wikipedia article for additional background information. Stanley and his wife, Margaret, sponsored the Eastman Leonard Commission for a new solo work for timpani and orchestra in 1991 and the Stanley and Margaret Leonard Collection of Percussion instruments for the school in 2007. They also commissioned a solo piece for timpani and wind ensemble at Duquesne University. They sponsored 60th anniversary concerts for the Eastman Wind Ensemble in 2013.

Active participation in the percussion world continues in retirement. Stanley is resident timpanist/composer/handbell director at Vanderbilt Presbyterian Church in Naples, Florida. Percussion Summit performances in Naples have included his works commissioned by the Naples Philharmonic Center for the Arts (Artis-Naples). He has appeared as a soloist at the Center and performed with members of the Naples Philharmonic. Stanley has served as a member of the Board of Directors of the Percussive Arts Society (PAS) and as a member of the PAS Symphonic Committee. He is listed in the PAS Hall of Fame. His participation in international conventions of the Percussive Arts Society (PASIC) has involved presentations of individual clinic/concert performances, a FUNdamental session, symphonic lab and performances with the Emeritus Percussion Section. Stanley and Margaret have sponsored grants for symphonic sessions at PASIC. He has presented master classes at conservatories and universities throughout the United States, Europe and Asia. Stanley is a Yamaha Performing Artist.